“Isn’t it like training for a contest that’s already over? A game that ended yesterday?”

If God already knows what’s going to happen, what’s the point of praying?”

Recall from my last post that prayer doesn’t change God’s mind. He’s unchangeable. Prayer isn’t for God. It’s for us. It molds us into his image. It helps restore us to God’s likeness, which is what this life on earth is really all about.

So let’s turn our attention to another facet of this issue. Why bother praying if God already knows what’s going to happen? First of all, we have to accept on some level that there is a mystery about all of this we’re just not going to understand this side of heaven. (Like the popularity of professional wrestling.) After all, we’re getting into the complicated relationship of grace and nature.

That being said, the short answer is this: We pray in order to release God’s grace because that’s the way he set it up. Call it cause and effect.

We all recognize that in the natural world God has set things up in a particular way. 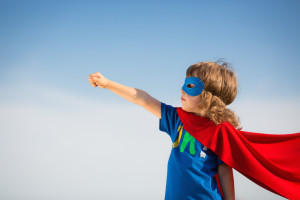 There are certain rules that govern our existence. Going to the dentist is going to hurt. Trying to “fly” off your roof like Superman with nothing but the fitted sheet off of your parent’s bed tied around your neck isn’t going to end well. (Especially if they’re off your parent’s bed.) If you want to reap a harvest, everybody knows you must first so the seed.

Well, the same thing is true in the spiritual life. To reap a spiritual harvest, you must first sow the spiritual seed. Prayer is that seed. It’s the primary cause that produces the effects of grace. It sets things in motion because that’s the way God wants it to be.

Does he knows what we’re going to ask for before we do? Of course. But just like any parent, he desires we make our needs known. Remember when your mom or dad would ask, “What’s the magic word?” when you were trying to grab something? “Say ‘please!'”

Prayer isn’t magic. But it does help put things in right order. It’s an acknowledgment by us – the lowly creatures – that there is a God who made us. And he’s not just our Creator, but a divine Being – a divine Father – who is deeply interested in the affairs of our life.

Prayer seeks a power that is beyond that of men. It can obtain and achieve that which only God can give. That’s why we do it.

So that was the short answer…which means there’s a “long” answer. Perhaps we’ll dive a bit more into it next time.

P.S. If you would like these posts delivered right to your Inbox on a weekly basis, just sign up in the form at the top right. Catholic education and inspiration has never been easier. You’ll even get one of my talks…for FREE!

One thought on “Why Pray If God Already Knows What’s Going To Happen?”