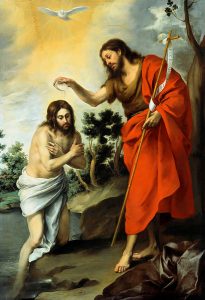 Have you ever met someone who said they did something because they felt “led by the Spirit”?

Sometimes it ends in disaster.

(I’m pretty sure that guy who thought God told him to paint his body blue and illegally run across the football field at halftime shouting “Hail, Mary!” wasn’t really tuned into God’s channel. The Spirit apparently led him to jail.)

And yet there’s certainly a reality to being led by the Spirit. It’s what we should be doing every day.

After all, Christ did.

And this is the example we’re all to follow. But how? How can we know we’re actually being led by the Spirit?

Well I’ve got one word for you…”Mary.”

Those of you who have been reading my posts or listening to my Art of Catholic podcast lately know we’ve been talking about how intimately Mary is united with the Holy Spirit.

In fact, St. Maximilian Kolbe makes an incredibly stunning statement that brings this mystery into sharp focus. Back in 1936, he declared that “the Holy Spirit and Mary are two persons who live in such intimate union that they live but one sole life.” Whoa! 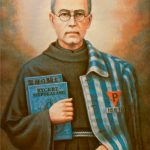 That idea would have totally freaked me out when I was coming into the Church some twenty years ago.

After all, we’re talking about the woman “overshadowed” (​episkiazo​ in Greek) by the Holy Spirit in the same manner the powerful Old Testament Ark of the Covenant.

We’re talking about the one woman God chose to carry within her womb and give birth to his only Son. She’s the one woman who is the very Mother of God and Spouse of the Holy Spirit.

So while one is creature and the other is the Third Person of the Trinity, it’s virtually impossible to overestimate the depth of the relationship between Mary and the Holy Spirit. She literally conceived God in her womb because of Him!

Anyone who argues against the special relationship between Mary and the Holy Spirit simply isn’t being true to Scripture. That’s some of what Curtis Mitch and I spoke about in my last podcast on the Queenship of Mary in Revelation 12.

And because of their intimacy, Mary is the key to us being led by the Spirit.

The Wedding at Cana is a perfect example. The same Spirit that led him into the wilderness, worked through Mary in order to instruct him in his first miracle.

Why else would Christ perform his first miracle when his “hour has not yet come” (Jn 2:4)? He knew she was intimately united with the Spirit. He knew the Spirit was working through His Mother. So he listened and obeyed.

So did the servants. 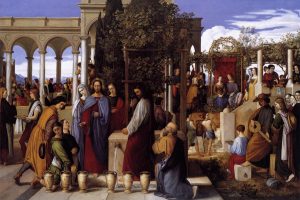 After instructing her Son, she turns to them and says, “Do whatever he tells you” (Jn 2:5). They immediately obey and so played an intimate role in a beautiful miracle.

If you want to be led by the Spirit, get close to Mary. Pray your rosary. Recite your litanies. Throw yourself into her maternal care and beg for her intercession.

And once you’re tuned into her voice and do what she says, you’ll be acting just like Jesus Christ. You’ll be led by the Spirit into the divine life of God. 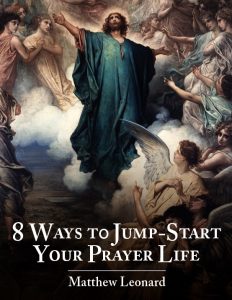 PrevPrevious077: Next Level Queenship of Mary
Next078: Unpacking the Our FatherNext