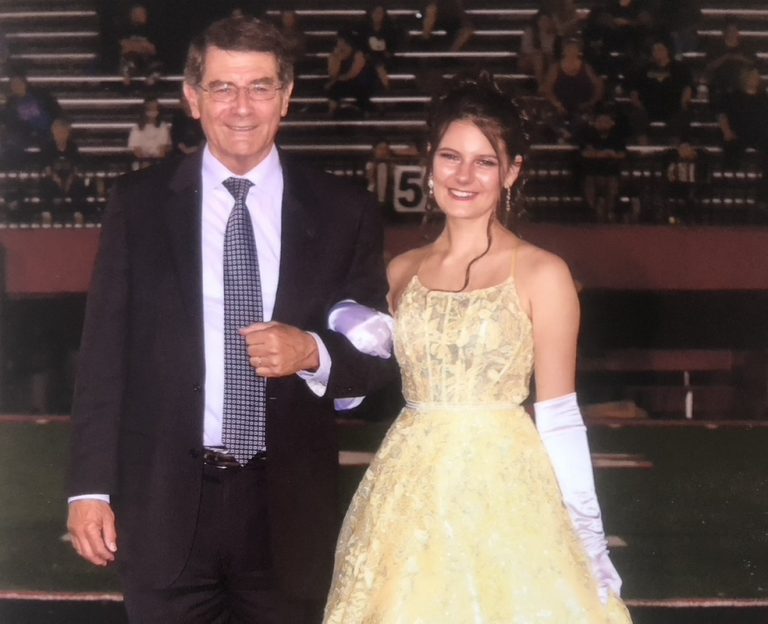 I totally thought I had a doozy of a story brewing. I’m talking planes, (dress) trains, and (convertible) automobiles.

What had started out quite terrible suddenly became unbelievably good. Incredible things were falling into place and I couldn’t wait to experience the adventure and share with you just how cool it is when God powerfully answers prayer.

But through the whole process I was once again reminded of a very important, though often very difficult truth of which we all need to be constantly reminded. Here’s what happened:

As you may or may not know, I travel quite a bit to speaking engagements throughout the year. Generally, these events are set up well in advance. And as you can imagine, unforeseen conflicts sometimes arise.

Case in point…my daughter Lulu was elected to homecoming court about a month ago. I suppose it was always a possibility, but it took us all by surprise. She’s a talented, beautiful girl with lots of friends, but unless you’re nuts, you don’t pretend to understand the minds of teenagers or predict how they vote.

And, of course, homecoming was to take place when I was off at a speaking engagement in the South.

Now I don’t know what it’s like in your neck of the woods, but in the Ohio Valley, homecoming is second only to the Second Coming. It’s a menagerie of football halftime shows, pretty dresses, parades with firetrucks, convertibles, and children throwing candy to the cheering crowd gathered along the thoroughfare.

And the father of the homecoming princess plays a large role (in addition to paying for the dress and flowers, of course). While mom actually does all the hard work of planning and execution, dad drives the convertible on which his daughter sits for the parade and walks his little princess across the football field at halftime.

And while I don’t generally live and die by school events, it was pretty tough for me to contemplate missing. I also knew it would be extremely disappointing to my daughter if I was absent. So I began desperately scouring the web for any flight schedule that would get me home in time (including airlines that normally you couldn’t pay me to fly.)

But alas, it was to no avail. Nothing worked. I felt miserable.

Of course, I had already begun praying…hard. (Gotta practice what you preach, after all.) In particular, I was asking Our Lady for a miracle. Surely she would understand how much I didn’t want to disappoint my daughter and miss this once-in-a-lifetime event.

And on the Feast of the Nativity of Mary, I received my “miracle.”

Well, in the midst of the days leading up to homecoming, I had asked a dear friend in Florida to please pray for the situation. And only a few days before it was to all happen, she texted me the following: “OK don’t hold your breath, but my neighbor across the street is a pilot and owns his own plane…”.

Well, I did hold my breath…and kept praying.

And it worked! A very generous guy who doesn’t know me from Adam was moved by the New Eve to offer to pick me up in his plane. No joke. He was going to fly from Florida to Memphis, wait for me on the tarmac, and then race me to the little airport outside of lil’ old Steubenville, Ohio.

“Who does that”, you ask? This guy does.

I was so overwhelmed with gratitude (and still am)! My prayers for a miracle were answered! I’d arrive about 30 minutes before the parade and wouldn’t miss a thing! I was so happy!

But two days later storm clouds appeared on the horizon…literally.

Because of a hurricane, the plane owner informed me weather reports were dicey and there was the danger that we would have to go around the storm, which would delay me. “That’s okay,” I thought, “I can still make it for halftime.” While my wife was nervously picturing me in the lead role of Tom Hanks’ movie Cast Away, I was ready to roll…or fly, as it were.

So I kept praying and constantly checking the weather. “Surely this will work out,” I thought. “Look at everything that’s already happened. My prayers were answered on a feast day, for crying out loud!”

But alas, on the morning of the big day while I was preparing to speak in Memphis, the pilot texted and said it was some of the nastiest weather he’d ever seen and couldn’t get a flight path. We were a “no go.” After all the prayers, generous offers, and excitement, I was grounded.

My heart sunk. My miracle didn’t happen. I wouldn’t see my daughter performing her princess wave.

So after spending the day with the wonderful people in Memphis, I headed to the airport knowing I had little chance of even making an appearance at the end of the football game.

To make matters worse, my commercial flight was delayed and it took even longer to get home than I had feared. I missed it all. I can’t tell you how depressed I was on that flight. It was a low point, for sure.

And in the midst of the delays and such, I had a lot of time to ponder what the Lord might be doing through all of this. Because as I said, I was pretty down. It seemed everything had lined up perfectly. After all, it’s not every day that an incredibly kind stranger just offers to fly you here and there in his private plane, especially for a senior homecoming. So why did God pull the plug?

And the short answer is, “I don’t know…mostly.”

What I mean by that is that while I can’t tell you all the myriad of reasons God chose to do what he did, I know that part of it was getting me to really practice what I preach. Look, I teach the spiritual life. It’s both my job and my burning passion.

And one of the most fundamental truisms of the spiritual life is that we have to be abandoned the will of God. That’s the key. Whether it’s happy or sad or fun or hard, we have to practice trustful surrender to divine providence.

And that’s the lesson I re-learned in all of this.

Even when we beg and pray (and enlist the prayer of others), disappointments still happen. God is not a vending machine where we put in a few prayers, pull the lever, and get our bag of grace and a happy ending.

There’s a much bigger picture than what I can see.

And as a child of God, I have to trust that my perfect, loving Father is going take care of me in the most perfect, loving way. He knows what’s best, even if it disappoints me.

And part of the tough reality is that I may never know why it all worked out this way…at least in part. I can tell you that because I couldn’t make it, my father-in-law took my place. And when I saw him at Mass the following day, he was beaming. Forget cloud nine, he was over the moon after escorting his granddaughter in all her finery.

That took away a little of the sting. (So did the fact that when I told my daughter I wasn’t going to be able to make it, she said, “Well, it will be a good thing to offer up.” The Lord was teaching her, too, and she was listening. My fatherly heart was certainly warmed.)

But the reality remains that we live in a fallen world. Bad things happen. Yes, Romans 8:28 reminds us that God will work it all out for good, but that doesn’t mean it’s always in the manner we want.

And yet if we truly believe that he’s our loving Father, we have to trust that he’s going to work things out for the best in every single aspect, no matter if we see it now or not.

Yes, it might seem a bit silly that I chose to use homecoming court to describe how I was again reminded of our need to surrender to the Lord’s perfect will. I could just have easily used the example of my mother passing away from cancer or other more serious occurrences.

But as Romans 8 declares, “in everything God works for good with those who love him, who are called according to his purpose.” In other words, it’s not just the big stuff, he’s working through every moment, every circumstance of our lives because he loves us so much.

So while I didn’t get the miracle I wanted, I got the lesson I needed. And trustful surrender is a lesson we all need.

Thousands of others have already experienced the Science of Sainthood. Now it’s your turn!

PrevPrevious117: (Mini-cast) Proof St. Joseph Was Not Old with Dr. Brant Pitre
Next117: Marxism, the Real Origins of “Woke,” & the Christian ResponseNext