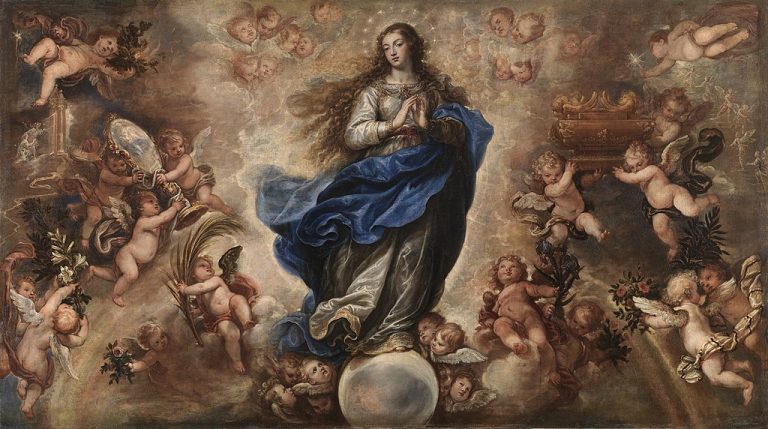 While I love it now, I didn’t always embrace the the Solemnity of the Immaculate Conception.

In fact, before becoming Catholic, I didn’t even understand what it was. I thought the dogma referred to something about Jesus, and how Mary gave birth to him while remaining a virgin.

It has nothing to do with Jesus directly. It’s all about how Mary was conceived.

It’s about God preparing her for the special role she would play in salvation history.

Defined in 1854 by Pope Pius IX in a document titled Ineffabilis Deus (The “Ineffable God”), the dogma of the Immaculate Conception states that out of all the billions of people ever born, she was conceived without inheriting the curse of Adam’s fall in the Garden of Eden.

In other words, she wasn’t sullied by Original Sin.

But what does that really mean?

It means that not only is she without sin, but she also has no concupiscence, that general inclination to sin that the rest of us have even after our baptism.

Through the Immaculate Conception, God basically made sure that Mary’s feelings and desires were rightly ordered. She is sinless.

That doesn’t mean she’s a holy robot. She totally has free will.

In fact, she’s more free than anyone else besides God himself. She could have said “no way” to God’s plan…just like Adam and Eve. But she didn’t.

Of course, this freedom from Original Sin has nothing to do with her own merit.

This is where people who don’t understand the dogma get all bent out of shape (like I used to).

Catholic doctrine clearly states that Mary’s sinless state is solely a product of God’s amazing grace. She didn’t do anything to merit it.

It’s a pure gift of God through the merits of Jesus Christ.

But what’s the basis of the dogma? From where do we get the teaching of the Immaculate Conception? Did Pius IX pull it out of thin air?

Though it wasn’t promulgated as a dogma until 1854, it has a very long history in the Church.

Back in the fourth century, St. Ephrem of Syria wrote about Mary being exempt from birth pains, a reference to one of the curses from the Fall (of which every mom is aware).

About the same time, St. Ambrose of Milan wrote about it saying “Mary, a virgin not only undefiled but a virgin whom grace has made inviolate, free of every stain of sin.”

The great St Augustine declared that all have sinned “except for the Holy Virgin Mary, concerning whom, for the honor of the Lord, I wish no question to be raised at all, when we are treating of sins.”

But that’s not all.

Allow me to drop one more little quote on you, though it’s not from a Father of the Church.

“God has formed the soul and body of the Virgin Mary full of the Holy Spirit, so that she is without sins, for she has conceived and borne the Lord Jesus.”

Elsewhere, this same guy wrote “All seed except Mary was vitiated (corrupted) by original sin.”

Who authored those quotes? None other than the Father of the Protestant Reformation himself – Martin Luther.

Drop that little nugget off at your next ecumenical gathering:). (On second thought, maybe not. I tried it once and it didn’t go over very well. Lol.)

Of course, there are many others in tradition who make reference to the belief of this doctrine.

But what about Scripture? Can we find it there?

Absolutely. That said, we have to acknowledge that it isn’t explicit. You’re not going to open to some passage and find a verse that declares “Mary was conceived without sin.”

It’s similar to other doctrines of the Church that aren’t explicitly identified, yet which no one questions.

For example, nowhere in the Bible does is say the word “Trinity.”

We believe in the 3 persons of the Trinity because it is derived from Scripture, though not stated explicitly. The Church drew it out and defined it.

And it’s the same with the Immaculate Conception.

In fact, when he declared the dogma, Pope Pius IX referenced three different passages in Scripture upon which the teaching of the Immaculate Conception is based:

And since we don’t have time to go into all of them, I just want to zoom in on one little part of the passage in Luke…which is huge.

Namely, Luke 1:28, the line used to address Our Lady by the Angel Gabriel which we’ve repeated a gazillion times when praying the rosary – “Hail, full of grace, the Lord is with you!”

There’s a lot of Catholic theology packed into that little statement.

You see, the phrase “full of grace” or “favored one” is the Greek word kecharitomene, a form of the verb charitoo.

This word only shows up twice in Scripture. Once in Luke, and once in Ephesians 1:6-7.

In fact, if you’ve been to mass today (don’t forget that it’s a holy day of obligation!), you heard the Ephesians passage in the second reading. And in it, St. Paul makes reference to how – through this charitoo – God granted grace to us through Jesus.

In other words, he’s talking about how we are transformed by sanctifying grace, the kind we get through the sacraments.

But in Luke, kecharitomene is used differently.

Here, the Angel uses the word in the perfect tense. This is key. Why?

Because its tense implies that Mary has already been graced and continues to be “full of grace.” She was made this way from the get-go.

But that’s not all.

Notice that “full of grace” is the name Gabriel gives to Mary. He doesn’t say, “Hail, Mary” like we do in the rosary. He says, “Hail, full of grace.”

And it’s not like he doesn’t know her name. After all, two verses later he calls her “Mary.” But he starts out with this new title, “full of grace.”

Why is this important? Because in giving her this new name, he’s showing her special role in salvation history. He’s showing why she’s been conceived “full of grace.”

And we’ve seen this same kind of “new name” thing before in Scripture.

God changed Abram – “exalted father” is to Abraham – –“father of a multitude of nations”.

Jacob, which means “supplanter” or “one who deceives” was changed to Israel – “one who reigns with God” or “Prince of God” – to show his new role in salvation history as the father of the tribes of Israel.

Simon was changed to Peter to show his new role as the rock upon which Christ will build the church.

So by addressing Mary as “full of grace,” the Angel is identifying her state and her role.

From before the foundation of the world she was transformed by grace to be the all-holy Mother of God’s only begotten Son.

Among other things, because it is fitting that the “no” to God’s will of the original Eve would be reversed by the “yes” of the New Eve. “Behold, I am the handmaid of the Lord; let it be to me according to your word” (Luke 1:38).

In other words, God’s plan is never random.

Mary, the New Eve, was immaculately conceived for her role in helping the New Adam straighten out the mess caused by the first Adam and first Eve.

“The knot which the virgin Eve tied by her unbelief, the Virgin Mary opened by her belief,” declared St. Irenaeus.

What does this mean for us today?

First of all, it means that Mary is an icon of what you and I are made to be – graced vessels of God totally conformed to His perfect will.

It also means that given her special and powerful role, we should never neglect our devotion to the Mother of God. Her one mission is to help us say “yes” to God and lead us into the heart of her Son, Jesus Christ.

So pray your rosaries. Pray your litanies. Beg the intercession of the immaculately conceived New Eve that you, too, may one day be “full of grace.”

Ave Maria and Happy Solemnity of the Immaculate Conception!

P.S. Why give another pair reindeer socks when you can give something that can change someone’s life? Give the gift of dynamic, authentic spiritual formation in the Science of Sainthood!