In some ways it seems ludicrous that Jesus prayed. After all, even in his humanity he remained the Second Person of the Most Holy Trinity. What gives? 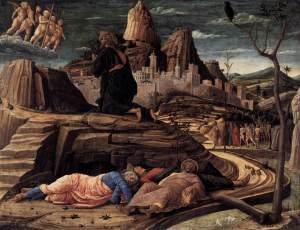 First of all, he prayed so that we would know what we are supposed to do. The whole Catholic life is basically becoming like Christ. Prayer is no exception. Jesus showed us how important it was for us to communicate with the Father. Time after time, the Gospels record Christ going off to be alone to pray. We are to do likewise.

But there’s more. Remember that he became human, like us in every regard except sin (Heb 4:15). For that reason, says the great spiritual writer Fr. Edward Leen, “He was subject to the same laws that govern us: the more prayer, the more grace; the less prayer, the less grace; no prayer, no grace” (The Basic Book of Catholic Prayer...fantastic book, by the way).

So it looks Christ needed to pray after all. And if the Second Person of the Trinity needed to pray…enough said. Go grab some shag and get back to me.