Can You Be Too Hardcore A Catholic?

It wasn’t the first time I’ve been told I’d scare people. That tends to be the response when you start talking about hatchets. 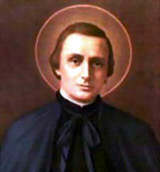 The first draft I turned in of my first book “Louder Than Words: The Art of Living as a Catholic” opened with a story of St. Peter Mary Chanel. He was the proto-martyr of Oceania (Western Pacific), a pretty amazing guy. I’d actually never heard of him until I was researching some people for the book. What I read curled my hair. (If you’ve seen my head, you’ll know that’s not a minor miracle.)

So to celebrate his feast day (April 28th), I’m doing something a little different with my blog post. Below is the slightly edited original opening of my book “Louder Than Words,” the story that was deemed (probably wisely) as too hardcore for the target audience of the book. You can decide and let me know.

The Proto-Martyr of Oceania

For three years Father Peter worked tirelessly on the tiny Pacific island of Futuna, yet his work yielded little visible fruit. Try as he might, the local king resisted his entreaties and kept his subjects from this new religion, though the people couldn’t help but admire the gentle priest. Persecuted constantly, he did his best to shepherd the few catechumens he was able to gain, though even they didn’t dare practice their faith in public. It seems the the threat of death by roasting put a damper on their enthusiasm. Futuna was bound by long-standing pagan customs and beliefs that offered little room for the preaching of the Gospel. Father Peter’s very presence was a threat to their way of life. 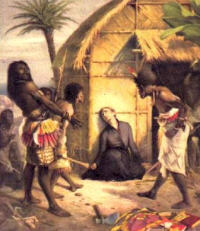 Finally, the populace could bear him no longer. They attacked him ferociously. Arms instinctively raised in self-defense were smashed by clubs. Powerful blows crushed his temples, a spear pierced his body. Blood flowing down his face, he bade a would-be helper to leave him alone because at that point death was a “boon.”

Even to one whose sensitivities are regrettably a bit dulled by numerous stories of martyrdom, this one was moving. It was hard for me to grasp the inner peace he exuded while my own gut, thousands of miles distant and almost two centuries removed from the event, was gripped by the fear. As the savage beating of his assassins brought him to the brink of death, all Father Peter whispered was “Tis well, tis well.” His life was finally ended by a hatchet.

His enemies thought they had won. They reckoned that if you kill the priest, you kill the religion. They were wrong. Within three years this warring island of cannibals was one hundred percent Catholic, completely converted. How? After all, no churches had been built, only a few people on their deathbeds had been baptized, and the few catechumens that existed were now without a shepherd. Yet when the Bishop came to collect the fallen priest’s body, the natives unexpectedly begged for more missionaries to be sent. Eight months after the new missionaries arrived, two churches had been built and the entire island converted.

So what caused the turnaround? How did a martyred priest who had so little to show for his three grueling years of labor affect the conversion of so many? The answer lies in the fact that while Futuna was the last battlefield, Father Peter had been fighting this war for many years. In the midst of the common duties of seminary and parish life in France, he had developed a deep interior life totally devoted to our Lord and His Mother. Well known for his humility and simplicity, he loved those with whom he lived and worked, and they loved him back. Indeed, the eulogist at his funeral mass invited Christian educators and evangelists to look to the example OF Peter Chanel so as to “learn how much of self-abnegation and meekness, vigilance and steadfastness, of the spirit of prayer and interior virtues, is required…to beget Jesus Christ in souls.”

At home or abroad, the weapon Father Peter wielded in his battle for souls was holiness. The natives of Futuna had never met anyone like him. The well of his love and patience was so deep that all referred to him as “the kind hearted man”. His prayer, virtue, and complete abandonment to Our Lord provided the fertile soil for the seeds sown by his preaching. His very life was a witness to the Gospel in a way that buildings and programs can never be. In the end, the very man who had buried the axe in his head reportedly desired that visitors would walk over his own grave on their way into St. Peter Chanel’s island shrine. Yes, even the murderer had been converted. Such is the power of a life lived for Christ. Such is the power of a saint.”

Well, what did you think? 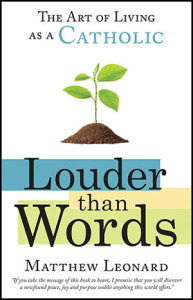 As an addendum, back in 2012 I was speaking in New Zealand, not too far from Futuna (relatively speaking). I gave 14 talks in 5 days, which was grueling…especially when you take into account the 16 hour time difference. By the last day (when I had to give 5 talks), my voice was completely shot. I could barely talk and it really hurt to do so. But my last day of speaking happened to be April 28th, the feast of St. Peter Mary Chanel. When I heard the priest say it in Mass, I knew I was going to make it. I said a quick prayer to this great saint, and figured since I was in his backyard he would help me out. I was right. I made it through.

So if you’re struggling with something hard right now, you might want to consider a quick prayer to a great saint. St. Peter Mary Chanel, pray for us!