Shortly after becoming Catholic in 1998, I had the opportunity to stand only a few feet away from St. John Paul II at a Wednesday audience in Rome. It was for only a few brief moments, but I’ll never forget the aura of his presence. 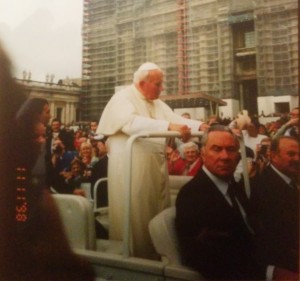 Despite his obvious frailty, there was something incredibly powerful about this man. He radiated holiness and love. You couldn’t help but be affected. He so moved me that I remained in the open when large storm clouds came rolling in over St. Peter’s Square right before his final blessing. Most fled for the protection of the colonnades as cold raindrops fell like small grenades out of the darkened sky, but I couldn’t leave. I wanted to stand with him. I wanted his blessing. This man loved God, and I knew he loved me, too. And I’m not the only one.

The whole world paid attention to the pope because he was real—you couldn’t ignore his authenticity. He practiced what he preached, and preached what he practiced. The twinkle in his eye and fire in his heart drew us to him. We all hung on his words. In his later years he bore his many infirmities with grace and humility, and his ability to inspire us only grew stronger.

(The above is an excerpt from my book “Louder Than Words: The Art of Living as a Catholic”)

It’s an offer beyond comprehension.

Take a minute and check out the preview of my upcoming appearance on EWTN’s Franciscan University Presents with Scott Hahn and Regis Martin. The show is on holiness and prayer. It will air on Nov 2nd at 10pm and Nov 5th at 5am. (Both are Eastern time zone.) Take a look at the promo…then join us!

And do me a favor and spread the word. Share this link to your own sites. God bless!

Matthew is leading a pilgrimage to Rome, Assisi, Monte Cassino, Cascia, Lanciano, and San Giovanni Rotundo from March 9-19, 2015. We’ll see all the glorious sites in Rome, experience the beauty of St. Francis’ home, the picturesque tranquility of Padre Pio’s tomb, and much, much more! Plus, we’ll be there for the second anniversary of the election of Pope Francis. C’mon! It’s going to be the trip of a lifetime!